Top 5 Sundays #24 - Series or Author That Make You Forget/Ignore Your TBR!

This week's topic on Top 5 Sundays are those series and authors I just can't wait for and absolutely, positively MUST read just as soon as I can, to hell with what other books might be waiting! This is probably something any bibliophile can relate to - heck, anyone who has ever waited in line for admittance to a night club can relate. Sometimes, no matter how good you look, someone (or something) else for one reason or another simply jumps ahead.

Here's my Top 5 and the reasons why; hope you enjoy!

The interesting thing about this series is that it reads like a comic book. The plot is simple: a group of young adults suddenly have their former powers return to them after they mysteriously vanished fifteen years earlier and decide to band together to rebuild the tarnished reputation superheroes have incurred since the aftermath of the last great hero/villain super match. What really distinguishes these books, however, are two things. Firstly, the stories actually bother to deal with the collateral damage incited by superheroes doing battle with the villains in the middle of major city centres. Secondly, the characters are amazingly well written with complex histories, distinct personalities and engaging dynamics. It's like The Justice League meets The Middleman and too good to wait any longer than absolutely necessary!

#4 - Monère: Children of the Moon series by Sunny

These books are not that long when it comes to the number of pages between their covers. When it comes to the plot, however, these books are jammed packed, using every word, every scene for all it is worth and just when you think everything's over, that's when the story flips. Take the first book; just when you think everything's settled, a car accident orphans Mona Lisa's brother. Among the book's other points: Mona Lisa learns she's only half human and, oh yeah, a Queen, falls in love, finds and meets her birth mother, acquires two  indentured servants, is introduced to a high court, meets the prince of Hell, loses her lover, gets kidnapped, falls in love again, escapes her kidnappers, exposes another Queen's treachery, and regains her lover. And that's only the first half of the book. Now imagine five books just as bursting with activity. Yup. It's like that.

I have never managed to get through one of these books without laughing. Betsy is a self-absorbed, shoe-obsessed air head who somehow landed  herself the job of vampire queen. Needless to say, hilarity ensues. Among my favourite adventures to date are Betsy's trip through time with her Satan spawned sister and unraveling the mystery of her zombified friend while coping with a total lack of help from her visiting future self. Wild times, man, wild times. 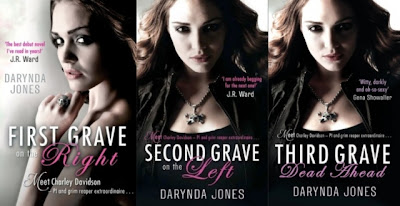 Another hilarious narrative but in a totally different manner. There's something about Charley's tone and thoughts that reminds me of my own making for a narration I find beyond easy to relate to. Toss in ghosts, demons and one hell of a hunky son of Satan and the only bad thing about this series is the unbelieveably torturous wait between book releases.

This series has everything - a sarcastic, crazy heroine whose powerful and kickass but has a heart, a domineering, control-freak alpha whose not afraid to let his devotion show, an extend cast of developed and distinct secondary characters, compelling and intricate mysteries that draw on mythologies and history from around the world and an overreaching story plot that progresses and deepens with each book. Add in the fast paced and engaging writing and, really, there's no question why these books jump the line.
Posted by Calliope at 5:29 PM