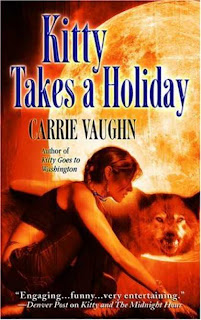 Cover Blurb:  After getting caught turning wolf on national television, Kitty retreats to a mountain cabin to recover and write her memoirs. But this is Kitty, so trouble is never far behind, and instead of Walden Pond, she gets Evil Dead. When werewolf hunter Cormac shows up with an injured Ben O'Farrell, Kitty's lawyer, slung over his shoulder, and a wolf-like creature with glowing red eyes starts sniffing around the cabin, Kitty wonders if any of them will get out of these woods alive...

First line: She runs for the joy of it, because she can, her strides stretching to cover a dozen feet every time she leaps.

What I liked: I really loved how Kitty's emotional turmoil was captured in writing. She had a rough time of it in the book before this and seeing her struggle through the emotions those events stirred up in her was a journey and adventure all its own. I especially liked seeing her interactions with the rival supernatural-based talk show host; it provided a nice sort of foil seeing how her views on the rival show changed with her views of herself.

What I didn’t like: The entire Cormac storyline. I felt that, with the past books, something was building on that front but with a few well placed swipes I feel as though that entire possibility came toppling down which makes me feel cheated. What's more, by the end of the book Cormac was taken out of play in more than one sense leaving me starring at the book and screaming, "How could you DO that?!" I love Cormac as a character and I saw a lot of potential in him - he provides a great contrast to Kitty in several ways - but now the writing's on the wall and all my hopes for him are pretty much rubble. Bright side, I'll hopefully get to rebuild them over coming books in new designs and directions.

Overall: One of the things I love most about this series is being able to watch (so to speak) Kitty grow and change over each book. In the first book, Kitty is a definite submissive, abused in several senses by her pack's alpha and whose only protection and affection comes from her best friend  and fellow wolf, TJ. By this book - third in the series - Kitty has left the pack and the abuse behind, developed a successful and prospering radio show and been out as a werewolf to the public with the video footage to back it up. This books really serves to show the final steps Kitty takes from who she was at the beginning of the first book to who she will be in coming books. The strength, courage and compassion she's been hinted to possess in the past comes to full flourish within these pages and it is truly a delight to see. At the same time, you get a very stark view of how the world - and its people - beyond Kitty's life
are adjusting to the realization that vampires and werewolves aren't just the stuff of story books.

Would I read this author again: Yes - the train wreck of the Cormac storyline aside, I still want to see how the rest of this story progresses and grows in coming books, to say nothing of its characters.

To purchase the book for yourself, you can find it at Chapters.Indigo.ca, Amazon.ca, Amazon.com, or The Book Depository. Enjoy!