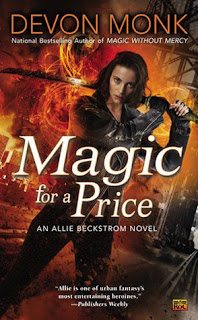 Book: Magic for a Price

Cover Blurb:  For most of her life, Allison Beckstrom has used magic and accepted the heavy price it exacts. But now that all magic is poisoned, it’s no longer just using people—it’s killing them.

With Portland about to descend into chaos, Allie needs to find a way to purify the wells of tainted magic beneath the city. But the only options left to her are grim: attempt to close down magic forever, or follow her father’s plan to set magic into the right hands—even though she’s learned to never trust his word.

Now, Allie will have to make a choice and face the darkness of her own deepest fears, before time runs out for them all…

First line: I never expected cookies at the end of the world.

What I liked: This book is the last in the Allie Beckstrom series and as such led to a lot of loose ends being tied up, what I liked, however, was that it wasn't done all at once or even one after the other. Right up until the very last minute there were questions hanging, questions that were answered in what felt like their own time rather than being rushed to shove it into the last book. Even better, those answers weren't what I was expecting, not by a long shot. This book also served to setup the upcoming spin-off series for secondary characters Shame and Terric in such a way that you have a firm idea of at least some of the plot points the new series will be tackling. Last books are never easy and I've read more than one where it ended and I was left staring at it thinking, "Seriously? That's...that's it? That's the end? You have GOT to be kidding me." This, I'm happy to say, was not one of those books; it was quite the feat and remarkably well done.

What I didn’t like: There was a lot of action going on, a lot of activity, which was by no means a bad thing, however with all of the story and the action going on there were very, very few moments of ordinary to break things up and remind the reader what it was the heroes were fighting to regain. Heck, I don't even think Allie went to Get Mugged for coffee until the very end. Understandable when you're a wanted fugitive, to be sure, but still disappointing that there were none of those happy ordinary moments, especially of the Zay and Allie variety.

Overall: I've waited eight books to see how happily ever after would be achieved for Allie; to say it seemed impossible at times is an understatement. The girl began the series with magic use costing her chunks of her memory and things just went downhill from there. Case and point, she began this book possessed by her dead father (whom she loathed when alive), on the run from a company of magical overseers led by a woman possessed by a pair of evil ghosts (there's a lot of possession going on, okay?) and whose every minute use of magic leaves her literally sick to her stomach or worse. But, hey, the book also starts off with cookies. Lots and lots of cookies - you can't go wrong with a book that starts off with cookies. Somehow, despite all the darkness and the seeming impossibility of happy endings, Ms. Monk manages to trudge her way through and  work everything out for one heck of an ending that's well deserved.

Would I read this author again: Yes - her next series cannot release too soon, especially if it includes more glimpses of Allie and Zay enjoying their happily ever after.

To purchase the book for yourself, you can find it at Chapters.Indigo.ca, Amazon.ca, Amazon.com, or The Book Depository. Enjoy!
Posted by Calliope at 10:00 AM