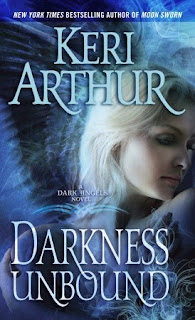 Cover Blurb: Being half werewolf and half Aedh, Risa Jones can enter the twilight realms between life and death and see the reapers, supernatural beings that collect the souls of the dead. But she soon makes a terrifying discovery: Some sinister force is stealing souls, preventing the dead from ever knowing the afterlife.

Reapers escort souls—not snatch them—but Risa is still unnerved when a reaper shadows her in search of someone Risa has never met: her own father, an Aedh priest, who is rumored to be tampering with the gates of hell for a dark purpose. With the help of her “aunt”—half-werewolf, half-vampire Riley Jenson—and an Aedh named Lucian who may have lost his wings but none of his sex appeal, Risa must pursue whatever shadowy practitioner of blood magic is seizing souls, and somehow stop her father . . . before all hell breaks loose.

What I liked: Well, right off the bat I love that, as a sequel to Keri Arthur's Riley Jensen, Guardian series, you get to see how life's turned out for Riley, Rhoan, Quinn, Liander and their pups, not to mention Dia, twenty years later. What's even better, you're introduced to new and never-before explored elements of Riley's world through a whole new perspective. Heap on top of that a brand new cast of characters - with fun and unexpected connections to past characters - and an engaging, tantalizing new narrator and this book quickly marks itself as something distinct and unique compared to its mother series, despite its shared world and back story.

What I didn’t like: You know what's worse that a stupid hero or heroine? A hero or heroine who says, straight out, what they should be doing, who agrees wholeheartedly with the advice given to them by others, who refers to the disastrous decisions of old and the wisdom learned from them...and then proceeds to ignore it all because, dang it, they simply can't stand the thought of their loved ones being harmed. Don't get me wrong - I can get behind that sentiment - but to then run headlong into danger yourself...it's just another brand of stupidity. Because, yay, you've spared your loved one physical harm on your behalf and instead they just have to cope with your injuries and potential death knowing that it was incited to spare their own. Yup, that's much better. Cue eye-roll here.

Overall: Hands down every bit as good as the original series. I can't wait to see how the story develops from here - especially when Risa has such hunky potential love interests fluttery about. Plus, I want to know Riley's youngest two children are named (The eldest set of twins - Liana and Ronan - are training to be police officers, the middle daughter - Darcy - is the only non-twin) and get more snapshots of her pack's happy home life.

Would I read this author again: Yup, no question. Between the futuristic setting of these series and the depth of Arthur's world-building, these books are pure addiction in pulp paper packaging.

To purchase the book for yourself, you can find it at Chapters.Indigo.ca, Amazon.ca, Amazon.com or Barnes & Noble. Enjoy!
Posted by Calliope at 7:36 PM