Alright, boys and girls, I took a break for the holidays but now I'm back and all set with a new Top 5 Sundays post. This week's theme is my Top 5 Sci-Fi series. Now, to be clear here, I take sci-fi to mean those series that involve advanced technology and science-based monsters and phenomenon, not necessarily space...although space certainly wouldn't hurt. 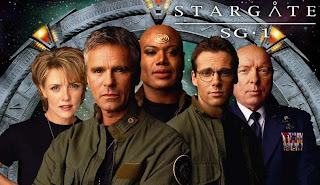 This show follows one of a dozen or so teams of US military personnel who use a giant eye-like portal generator to transverse and explore the universe. My favourites seasons are the ones with Jack, Carter, Daniel and Teal'c; they have the best team dynamic, in my opinion, and I just plain love the characters. It's amazing how often Daniel can get killed and bounce back. 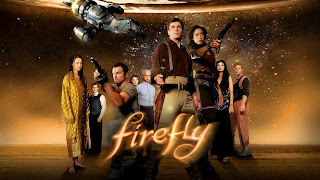 They aren't heroes. They're barely good guys. What they are is essentially a ragtag crew of futuristic pirates who take in a brother and sister running from the law and get in some serious trouble in the course of one misadventure after another. But with sarcasm and deadpan humour and irony tossed in. Plus, you know, Nathan Fillon. 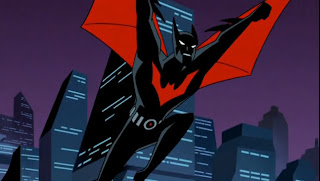 It's Gotham, fifty years in the future, and Batman's retired. That is, until Terry McGuinus, through a series of unfortunate events, finds his way to the Batcave and, with Bruce Wayne about to mentor him, dons the cowl (no cape) to fight crime in Gotham once more. But with some really, really awesome technology, even by Batman standards. And all while dealing with high school. *happy sigh* 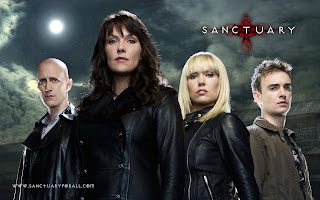 In the late nineteenth century, five scientists injected themselves with a sample of original, undiluted vampire blood and consequently woke previously dormant traits in themselves. Fast forward to the present and one of them has established a network meant to stand between humanity and the abnormal creatures that share this world, protecting both sides from each other. And it stars Amanda Tapping and features a vampiric Tesla and a teleporting Jack the Ripper. What more needs to be said? 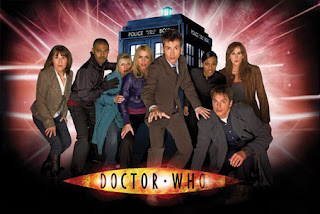 So, what we have here is a thousand year old Time Lord (give or take a century), the last of his kind, who travels around the whole of space and time in a blue police box with one or two human sidekicks in tow to keep him from losing touch with his morals. As the man himself says, "I'm the Doctor, but beyond that, I - I just don't know. I literally do not know who I am. It's all untested. Am I funny? Am I sarcastic? Sexy? [he winks at Rose] Am I an old misery? Life and soul? Right-handed? Left-handed? A gambler? A fighter? A coward? A traitor, a liar, a nervous wreck? I mean, judging by the evidence, I've certainly got a gob."
Posted by Calliope at 5:59 PM

I love Batman comics and movies, but I only watched the cartoons as a child so I didn't choose it, although I thought of it!