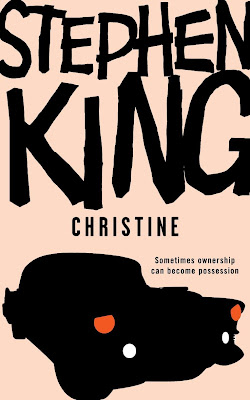 Cover Blurb: Christine, blood-red, fat, and finned, was twenty. Her promise lay all in her past. Greedy and big, she was Arnie's obsession, a '58 Plymouth Fury. Broken down, but not finished. There was still power in her - a frightening power that leaked like sump oil, staining and corrupting. A malign power that corroded the mind and turned ownership into Possession.

First line: This is the story of a lover's triangle, I suppose you'd say -- Arnie Cunningham, Leigh Cabot, and, of course, Christine.

What I liked: I thoroughly enjoyed the tone King used for the narrative. The book is divided into three parts, the first and third of which are written in the first-person perspective of Dennis Guilder. It's made clear early on that Dennis is in fact writing some years after the events he's recounting, events that occurred back in 1978 when Dennis was your average American teenager whose best friend just bought himself an old car to fix up. The phrasings and expressions used and, heck, even the emotions described, all seem to embody the voice of a teen. You get to read the story as a build-up, slowly seeing Arnie's descent into Christine's clutches from an outside perspective; it was amazingly well done.

What I didn’t like: The car is going to kill people. You know it. I know it. Illiterate island dwellers raised in isolation with no contact with the outside world know it. It took over four hundred pages for the car to kill someone. Up until that point, the horror element of the book was carried by creepy vibes, unexplained regeneration and a flashback vision or two. There was build-up and buckets of backstory was dished out and miles of ground work laid out.For four hundred pages. Just think about that for a minute. Four hundred pages of build-up, of working towards something you see coming from page one. Sure, it was well written, but for crying out loud there comes a point where you just want the car to make with the homicidal tendencies already!

Overall: I can definitely understand why Stephen King gets the hype that he does; there's no question it's deserved. His narrative is stark, yet infused with the definitive voice of his character. I especially loved his choice of words for several of his descriptions; this is one writer who knows how to rock the simile, to say nothing of the metaphor. I also enjoyed the character development and how it unfolded, especially when limited as it was to the first person perspective for the first and third parts of the story. Incidentally, the second part of the book, which covered the time between Thanksgiving and Christmas while Dennis Guilder was hospitalized for a soccer injury and thus effectively cut off from the story's action, was written in third-person and bounced around between all the other characters. The concept of Christine being almost like a girlfriend to Arnie was a good way to view the relationship, even if a third-party did somewhat ruin that image. This third-party was, incidentally, my least favourite element of the book. I have to say that, in this instance at least, I much prefer the movie's interpretation of Christine as inherently evil rather than being possessed by a malevolent spirit. All-in-all, there was definitely, absolutely, positively no question that this was a horror story - it just took way too long to make the transition from thriller to outright horror.

Would I read this author again: Yes - the man knows how to give you chills!

To purchase the book for yourself, you can find it at Chapters.Indigo.ca, Amazon.ca, Amazon.com, or The Book Depository. Enjoy!
Posted by Calliope at 4:02 PM