So, admittedly, science fiction is not my typical cup of tea. Usually, when I read sci-fi, it tends to be an accident. How do you accidentally read a sci-fi book? Well, let's see. Sometimes I'll pick it up because I've read something else by the author and want to see how her tone differs between genres. Sometimes I'll pick it up thinking it's fantasy and realize midway through that, nope, it was misshelved (...is that a word? If not, it should be.) Sometimes I have no other options readily available. Sometimes there's a movie or book tie-in motivating me. And sometimes the plot and writing are just too good to pass up on. Plus, you know, who can resist aliens from outer space?

Oh, and just to be clear, I consider Sci-Fi to refer to books where a major element of the setting - if not the plot itself - is advanced science, be it in the form of technology, interplanetary associations, or time-jumps into the far future.

So, without further ado, I give you Calliope's Domain's Top 5 Favorite Sci-Fi (Space Opera) Books! 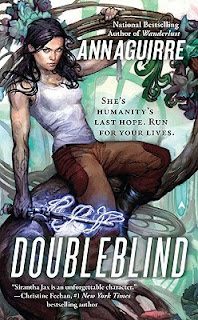 This is a book about a girl whose genes allow her to mentally jump ships through hyperspace. She is serving as an ambassador, of sorts, on a diplomatic mission to a planet of giant bugs while dealing with the fact that her PTSD suffering, telepathic boyfriend's recent experiences have cut him off from his emotions and made him dangerous and unpredictable. But, hey, you know, no pressure or anything. 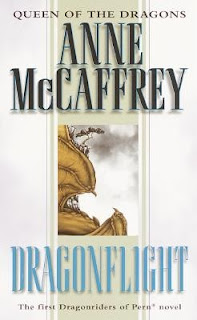 I first read this book when I was still in elementary school and the dichotemy of main character Lessa fascinated me. She was such an interesting blend of brave heroine and scared little girl. Case and point; when she and her dragon go back a couple hundred years in time, she's most concerned with the fact her mate is going to be upset and shake her something fierce when she returns. And, oh yes, did I mention she totally redefines the role of her gold dragon and saves the day in a way no one could have ever predicted? 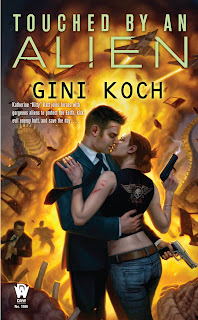 Honestly, the whole series is awesome beyond words but the first book? That's where the love affair began. I mean, imagine you're a covert agency with aliens and humans working in tandem to rid the world of dangerous mutant-causing parasites and you've been working at it for decades. Then one day this girl walks in and a few days later has not only killed several of the parasites, something you've found all but impossible to do yourselves, but done so using hair spray, boiling water, bass pounding music, and salt water. See? Told you. Awesome. 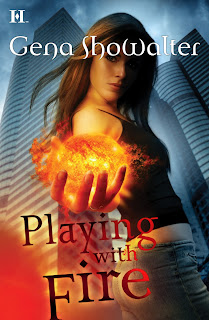 Superheroes work for the government to bring in villains with dangerous powers of their own. How did they get these powers? Well, while most of them volunteered for the government-funded experiments, heroine and narrator Belle Jamison received her ability to control the elements through a syrum dropped into her coffee by a fugitive mad scientist. Add in heaping dollops of humour and romance and presto! You've got perfection! 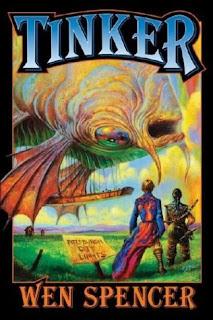 A satellite launched into space twenty years ago had the unforeseen consequence of sending the whole of a futuristic Pittsburgh to another dimension for all but three days of each month, another dimension populated by elves and adjacent to a third dimension filled with demonic oni. The heroine is a plucky little genius who finds herself entangled with the elves and in short order with the oni. It's the price you pay when you're the only genius around capable of building transdimensional gates. Such hardships!
Posted by Calliope at 8:23 PM