REVIEW: Kristen Painter's Out For Blood 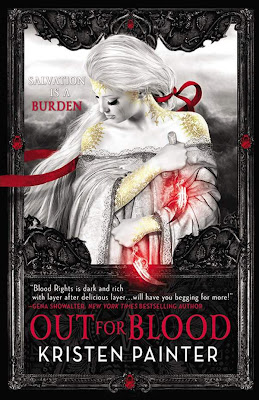 Book: Out for Blood

Cover Blurb:  After nearly dying at the hands of the Aurelian, Chrysabelle finds new determination to move beyond life as a comarré. That is until the Kubai Mata bring a new task to her doorstep: rescue the child Tatiana has kidnapped, or Mal becomes enemy number one.

First line: Deep in sleep, Chrysabelle curled against a cold, steely form that paralleled her own.

What I liked: Since about five minutes into meeting each other, Chrysabelle and Mal have been dancing around loving each other. Unfortunately, they've also had more obstacles standing in their way than Romeo and Juliet and Tristan and Iseult combined. Chrysabelle is newly arrived in the modern world, innocent in many respect but possessing more bravery, stubbornness and conviction than you'd expect. Mal is a twice-cursed, mad as a hatter vampire who sees himself as a monster undeserving of friendship, let alone love. It was an uphill battle to say the least, but this book finally - FINALLY - brought all that tension and dancing to fruition. He said I love you. She said I love you. Smiles, kisses, and marriage proposals followed swiftly thereafter. I love these moments, these happy little pauses, these streaks of normalcy in a story where everything else is going to hell and resolving into chaos. Yes, she's a genetically engineered geisha-et-warrior. Yes, he's an insane monster with ghost issues. Yes, the world is on the brink of war in more than one sense. But as far as Chrysabelle and Mal together are concerned, she's a girl, he's a boy, and they're in love. What can be more simple than that?

What I didn’t like: It is my deeply held belief that cliffhangers are the single most frustrating, most diabolical, most straight out cruel literary device to ever hit a page. You spends hours immersed in a story, invested in what's happening to the characters, in what's going on in their world, and then, suddenly, all you're abruptly cut off from what happens next at what must be the most inopportune time imaginable and then expected to wait months - MONTHS - for the story's continuation to release. Drives me bonkers. I mean, okay, it's one thing when you just have to wait a handful of weeks - the first three books of this series, for instance, released at monthly intervals one after the other. It's another thing entirely when the cliffhanger is followed by a, meep, nine month wait until its resolution. So, I think it goes without saying here that Out for Blood has a cliffhanger ending.

Overall: These books tend to be rather heavy on story, alternating between multiple perspectives and storylines. The upside to this approach is that it serves to give readers a fuller and more varied view not only on the characters, but on the various circumstances and philosophies running through the plot. On the downside, readers can get impatient waiting for the narrative to rotate back to a particular storyline. Personally, when I read these books I go skip back and forth through the book to read one particular storyline at a time: first Chrysabelle and Mal, then Tatiana, then Doc and Fiona, then Creek (who I am so not happy with right now), then Lola and so on. It works for me since I'm never really one for the linear path - I almost always read the ending of a book first, for instance - but others will just have to be patient. Its narrative style aside, one of the best features of this book is the constant references it makes to the duality of light and dark. Every character, every couple, every conflict in some way represents this dichotomy. Heck, case and point: Mal, who has dark hair and is an insane, murderous vampire covered in black tattoos, loves and is loved by Chrysabelle, a blond, innocent geisha-like blood donor who bears golden signum on her skin.  Add in all of the romance, intrigue, subterfuge, tragedy and risk and you're left with one heck of an epic ride.

Would I read this author again: Yes - I want the resolution to the cliffhanger, dang it!

To purchase the book for yourself, you can find it at Chapters.Indigo.ca, Amazon.ca, Amazon.com, or The Book Depository. Enjoy!
Posted by Calliope at 6:26 PM

Labels: Kristen Painter, Out for Blood, Review, The House of Comarré