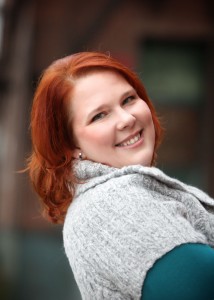 Today I have another special treat in store for all you lovely readers - an interview with paranormal author, Kasey Mackenzie. Scribbler of the Shades of Fury series, Ms. Mackenzie has a wonderful talent for blending together the world's mythologies - both past and present - with delightfully entertaining adventure and just a dash of romance. Her most recent book - Blackhearted Betrayal - is just over a month on the shelves and if you haven't delved into this world before, I definitely recommend doing so posthaste. I mean, heck, her main character is a Fury, for crying out loud, as in of Greek mythology fame Fury. And that's note even mentioning her intricate world building. Not that I'm a fan or anything...Yep, I ish subtle, aren't I just?

So, without further ado, I give you Calliope's Domain's interview with the one, the only Kasey Mackenzie! Cue applause here.

Calliope: The basics are always a fun place to start so, do tell, who exactly is Kasey Mackenzie?
Kasey Mackenzie: Well, THAT'S a loaded question. The short answer is I'm just a science fiction and fantasy geek who also loves romance, along with computer games, reading, and writing. And we don't have time for the long answer. Plus, I'd have to plead the Fifth anyway.

Calliope: Tease.
Kasey Mackenzie: I like to think that the best people (and writers) are!

Calliope: Oh, no doubt. You have this delightful tendency to somehow tie up your story and still have at least three questions hanging like loose threads!
Kasey Mackenzie: The better to hook you with, my dear!


Calliope: This, of course, brings us to a rather important question - what exactly ARE your stories?
Kasey Mackenzie: You mean, existentially speaking? Because wow, I don't tend to consciously think about things like that. I pretty much just come up with characters I find interesting, put them into a whole lot of trouble, and watch them work their ways around all the mayhem I've thrown their way. Though I guess, at the heart of it, my stories are good vs. evil, where "good" and "evil" aren't always black and white. I mean, most villains rarely see themselves as "evil" or the "bad guys" anyway.

Calliope: This is me refraining from making a shades of grey pun. I'd like credit for that.
Kasey Mackenzie: Haha, honestly I haven't read that one yet so I can't make puns or anything.Oh wait, you're not talking about 50 Shades of Gray. Hee.

Calliope: Nope - inferring, maybe, but more by coincidence. More on point though, how does your 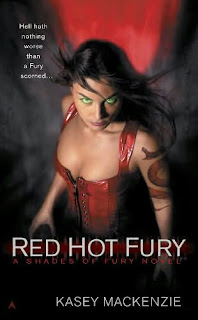 story ethos come into play with your Shades of Fury series?
Kasey Mackenzie: I think that my fundamental belief is that people have to fight for what they believe in. Even if that means sacrificing things that mean a lot to them, or pushing through a lot of pain to get through to the other side of a dark place.We certainly see Riss coming to this conclusion as the books proceed; especially in Blackhearted Betrayal.

Calliope: Blackhearted Betrayal is your most recent release, barely on the shelves a month now. What can you tell us about it?
Kasey Mackenzie: I can tell you that it was an absolute bear to write! Oh, wait, you mean concrete details? Well, those who love Riss's snake tattoos, Nemesis and Nike, will be excited to see the play a much bigger role this time out. I also think that those who enjoy my plot twists will be especially happy with this book. Riss starts out heading to the Palladium to clean house in the Sisterhood, only to find out that their problems are way bigger and actually involve the gods and goddesses, as well."them play" not "the play" (obviously)Stupid typos!

Calliope: LOL, the Eleventh Plague, hands down
Will there be more Fury books to come?
Kasey Mackenzie: That is the million-dollar question, it seems. My plan is absolutely for there to be more Fury books; unfortunately I don't yet have any logistical details to share right now. I'm sort of in a holding pattern as far as that goes. But I definitely foresee way more stories for these characters and this world, so hopefully readers can be patient while I work out the details.

Calliope: If ever there was a time to knock wood! With there be so much uncertainty regarding your next publication, what are you working on right now?
Kasey Mackenzie: I have several writing irons in the fire, so to speak. I just submitted a book dealing with humans who wield Elemental magic and must form magical partnerships called Quatrains in order to channel that magic without going insane. It's a more romance-ish urban fantasy than the Shades of Fury books. I have a dystopian project I'm poking at that features the aftermath of a world decimated by cancers after scientists unlock the aging gene and create a subset of "Ageless" people who now must re-sow their seeds among the "Aging" populace so that those folks don't completely die off to the cancers. And I have a bunch of other UF projects at various stages of completion I'm poking at, depending on what my editor asks to see.  :)These things always sound way cooler in my head than summed up in a couple sentences.

Calliope: One thing I noticed in your Shades of Fury books, you have one heck of a knack for world building and weaving together our world with that of your imagination. Is there any/very much 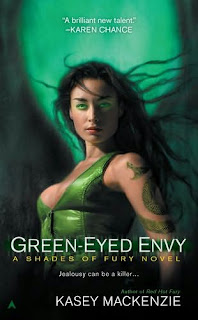 research involved in your processed?
Kasey Mackenzie: I do consider world-building one of my own personal strengths, and that probably has a lot to do with the fact I have always loved mythology and other cultures. I read across a wide variety of myths and religions and that breadth of reading always seems to work its way into my stories, whether consciously or unconsciously. I do enough research to understand the basics of whatever real culture/myth/whatever I'm including in the story, but not so much that it bogs me down in the details since I always put my own spin on it. That's one of the great things about writing fiction - you get to do a certain amount of "hand-waving" in urban fantasy, especially, as long as you make your own world-building rules internally consistent. Or do a damned good job of explaining WHY something turns out NOT to be the way you first established it.

Calliope: Has writing always been a passion of yours? Where did it come from?
Kasey Mackenzie: It has - I've been a voracious reader since about the age of 3; writing since the third grade or so, I'd say. I remember telling stories before that - but that's about the age I started writing them down. And darned if I can tell you where it came from. The story fairy?

Calliope: What is it about mythology that attracted you? In your Shades of Fury you have pretty much have all of the heavens and underworlds thrown in.
Kasey Mackenzie: What was it that made humans create myths to explain how the world works in the first place? I think whatever created that drive in them created the interest in me.  :)  Which I guess is to say, I don't know how to explain it. I have always loved fairy tales and magical stories and that probably has a lot to do with it. As for my Shades of Fury world, I like to explore the concept that no culture/religion is actually "wrong."

Calliope: What do you consider the hardest part of writing?
Kasey Mackenzie: Hmm. I used to consider revisions the hardest part of writing, until I mastered the art of revising. Now I look forward to the opportunity to improve the basic bones of the story and polish everything up as shiny as I can get it. The middles of stories are probably the hardest part for me. The beginnings aren't too terrible, because everything seems all new and fresh. And once you read about the last third of the story, things are on a role and it seems pretty easy to rush through to tie everything up in the end. The middle third though - sometimes that can feel tricky because it seems like you still have so far to go."read about the last third" should say "reach about the last third" oy.role = roll...oh noez I'm making my inner editor cry.

Calliope: Eleventh plague. Seriously. I so very, very much agree on the revision front. *shudder* Definitely not fun out of the gate.
In terms of your Shades of Fury series, what element do you think is the hardest to get right? The romance? The dialogue? The description?
Kasey Mackenzie: Hmm. I think that the romance itself (as in the relationship) isn't that hard for me, but actual, physical love scenes (i.e. the sexx0r)...I am much better at reading those than writing them. That's something I'm working on.  =)

Calliope: And this brings us to...drum roll please...the LAST QUESTION! In theory. It probably won't be. Because I have commitment issues.
What are you reading right now?
Or what did you read last? Whichever applies.
Kasey Mackenzie: An important question! I am broke so I am re-reading the first 12 books of the 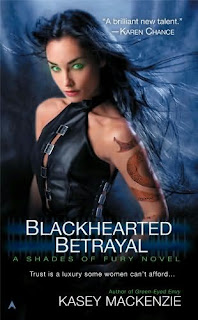 Stephanie Plum series on my iPhone.  :)

Calliope: Did you see the Katherine Hiegl movie?
Kasey Mackenzie: I did - that's what prompted me to want to re-read the series!  :)

Calliope: So it stacks up well? Or, you know, as well as a movie can to a book...when Peter Jackson isn't involved.
Kasey Mackenzie: I actually thought they did a pretty good job. I was kinda iffy on Katherine Heigl in the role when I first heard she had been cast, but I think she pretty much nailed Stephanie dead-on.Debbie Reynolds was a HOOT as Grandma Mazur.And Daniel Sunjata as Ranger...I have a new one to put on my "yum" list!

Calliope: LOL, got to love it when Hollywood gets it right.
You have a Dream Cast for Shades of Fury?
Kasey Mackenzie: Hmm, Kristin Bell a few inches taller as Riss, Oded Fehr as Scott, Gabrielle Union as Trinity, and I'm not sure on any others...hahaI actually envision Riss in mortal form as Kristin Bell and Oded Fehr from The Mummy as Scott.  :)Oh, wait! Eva Mendes is Harper. Haha almost forgot that one.

Calliope: So, what you're saying here is that you write a series where Veronica Mars has super powers and a red-headed Ardeth Bay goes wolfy.
Kasey Mackenzie: Pretty much!  :)
Calliope: Wicked.
Posted by Calliope at 2:54 PM

Veronica Mars with super powers? I'm in! Sounds like a great series, I'm going to have to pick these books up. :D