Top 5 Sundays #7 - Finished Series I Wish Would Come Back

Aha, another week, another Top 5. This week's topic is the top 5 finished series I wish would resurrect; not as easy to answer as you might think. Take, for example, one of my favourite series, Gail Carriger's The Parasol Protectorate. It recently ended with the publication of the fifth book, Timeless, earlier this year, and while I was sad to see the curtain close on Alexa, Maccon and the rest of the cast, I have to admit things came to a satisfying finish. Recently, Nicole Peeler posted on The League of Reluctant Adults blog an explanation for the impending conclusion of her Jane True series. In her words,


I wanted to end in control of the character and the book, and in a way that satisfied me and, hopefully, my readers. As a reader myself, I remember with love the series that left me wanting more--the ones that ended when I was still involved, still engaged. So that's how I wanted Jane's story to be. I wanted to end before I lost the flow of the original idea, or got bored with my own character, or bored my readers.

And I have to admit that I agree with her.When it comes to a series, sooner or later, no matter how much you love the characters, the plots, the writing, there comes a time when you just want to know how it all ends.

And sometimes, things end too soon and you're left staring at the last page wondering if a printing error has cut a chapter or two off the end. "Seriously?!" you think - or possibly shout out loud, "this is how it ends?! But...what happened next?! And what happened to this or that secondary character?!"

This week's list  highlights some of those moments and at the same time goes out as a sort of wish list. Maybe...just maybe...

Since this series ended with its fifth book's publication in 2008, its had at least three short stories release focusing on secondary characters. One in particular - "Coming Home" in 2008's The Mammoth Book of Vampire Romance - took up the story of Dante's ward, Liana, and made it abundantly clear how awesome she'd be if given a chance to shine in her own series. 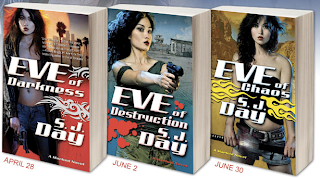 This was an amazing series that put a fantastic new spin on angels, demons, and, most important, Cain and Abel. It had mystery, romance, tragedy, adventure and even a journey of self-discovery. It was beyond epic. And then it was over. Fortunately, the third book's cliffhanger was resolved in a short story published recently in The Mammoth Book of Paranormal Romance 2, but tossed in a brand new one in its place.

This was a humourous, romantic, super-powered romp that could well use a third installment. After all, Belle and her main man, Rome, fell in love in Playing with Fire and wed in Twice as Hot in a classic take on first comes love, then comes marriage...isn't the baby carriage due to make its appearance now?

So, okay, Eden and Darrak got themselves a happily ever after. Ditto Ben and Lena. But what about Lucas? Poor guy is still the Bruce Banner of fallen angels, still stuck with the worst job known to man or angel...and once you got over the Satan thing, he really was something of a sweet guy. Doesn't he deserve a shot at happily ever after too? 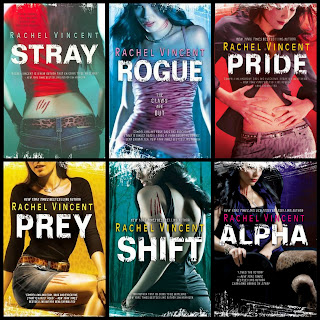 The last book in this series ends with a marriage proposal on a battlefield and the sense that Faythe was too stubborn and determined not to win her way with the Council thereafter. Since then, I've been eagerly awaiting an announcement for a new series featuring Kaci, Faythe's ward, as the new main character. She was thirteen years old when she first popped up in Pride so popping back in ten years later...well, it's working great for Keri Arthur's Dark Angel series and I think Rachel Vincent would do just as well!

I've only read the shifter series by Rachel Vincent. But I haven't read the last book. Have a great sunday!