There are a lot of men out there in TV Land of all different types and appearances and personalities. It's a virtual man zoo out there and, like any kid at zoo, I've got my favourite must-see specimens. Here, for this week's installment of Calliope's Domain Top 5, are my top male TV characters. 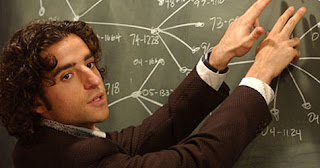 A mathematical genius, Charlie Eppes is a university professor with a sweet and decidedly geeky personality. What makes him one of my favourite male characters, however, is the fact that despite his genius, despite all his accomplishments in his field and all of the recognition his work affords him, at the end of the day Charlie is just an awkward kid trying to get the approval of his big brother.  It's something younger siblings the world over can relate to, and it doesn't hurt that in this case the big brother is an FBI agent who isn't afraid of telling the NSA (or anyone else, for that matter) to back off his little brother. 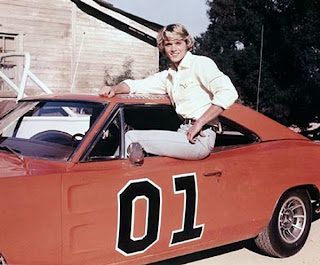 Bo was a blonde haired, blue eyed good old boy who drove around the rural counties of Georgia in a Chevy Charger with his older cousin, Luke. He was impulsive and quick to anger, with the mean left hook to match. More often than not, he and Luke would land themselves in one sort of trouble or another, usually on account of Boss Hogg. He was a charmer, a definite ladies' man, who would have just as much fun turning a no into a yes as getting a yes straight off. His main point of appeal? Man, could that boy drive a car. I am willing to forgive a great many faults for a man who can drive as well as Bo Duke. Oh! And he totally do the bow and arrow thing. He was a modern day Robin Hood, complete with loyal steed! 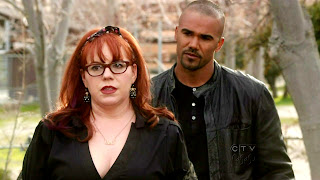 What can you say about a man whose best friend is the overly flamboyant  computer technician who, on top of being heavy set and in need of glasses, is definitely firmly set on the geeky side of life? Penelope Garcia's the type of girl whose really very sweet, friendly and loyal but, drop her into any high school the world over, and she'd be mercilessly bullied and then some. Morgan, meanwhile, is the heart throb who, once upon a time, played high school AND college football as, you guessed it, the quarterback. And despite these two coming from totally opposite ends of the high school social spectrum, they're best friends. Despite Garcia being the analystist to the team as a whole, more often than not it is Morgan who serves as her primary contact, calling her from the field for info and updates. He's also dubbed Garcia with several nicknames, including "Baby Girl," "Doll Face," "Sweetness," and "Mama." His loyalty and sweetness towards Garcia more than anything else makes him a favourite in my books. 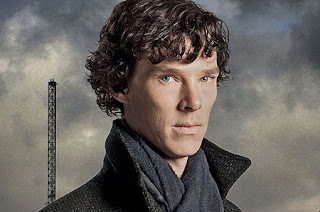 I think it goes without saying that Sherlock - in all of his incarnations - is an ass. His ego is like the universe - ever expanding - and he uses his rather intimidating intellect as both a blunt instrument and a shield. His manic, exciteable personality has him jumping about like a five year old on a sugar rush one moment and sunk into a bored depression the next, all depending on whether or not he has a case to work. And then, in the middle of it all, will come a sweet and touching moment; he'll apologize to Molly for not appreciating her or drop a villain out a window for roughing up Mrs. Hudson. He's a complex and many layered character that can't help but entrance. 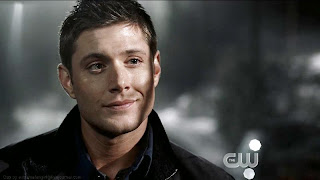 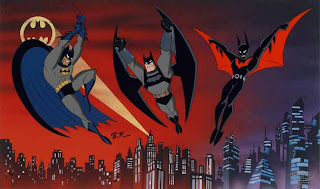 So, he's been in a couple of shows - Batman: The Animated Series, The New Batman Adventures, Batman Beyond, Justice League, Justice League Unlimited, The Batman, Batman: The Brave and the Bold, Young Justice...the list goes on. He's always the hero who's going to stay true to his ideals no matter what, always the hero who's going to make the hard choice, always the hero who'll know the most, have deduced the most, have the most background information going in. On the flip-side, he also the hero most likely to take in the vengeful preteen and train them so that they learn a code, learn to defend themselves so that when they go for their vengeance they do it within the legal system in such a way that guarantees their own survival. How can anyone not love Bats?
Posted by Calliope at 9:18 AM

I love the Criminal Minds gang and the friendship between Morgan and Garcia is amazing. Batman is one of my favorite superheroes, too.