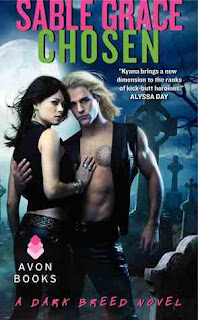 Cover Blurb:  She was a Dark Breed -- half Vampyre, half Lychen.
Now she is CHOSEN…

Kyana is the new Goddess of the Hunt, chosen for her determination to survive as much as for her passion to protect those she loves. Now, just when she's finally ready to shed her past and let the one man who really matters into her heart, an evil has resurrected, and only Kyana stands in its way.

But Ryker, as the new Zeus, will not let her fight alone. It has taken him too long to convince Kyana they belong together for him to lose her. And if it means descending into the depths of Hades to make the ultimate sacrifice, then so be it.

The fate of the world is at stake, and for Kyana and Ryker, no fight has ever been more personal.

First line: She watched Haven tilt her head back and let out an unladylike shout of laughter, and everything in Kyana Aslan's body warmed with contentment.

What I liked: One of the things I love most about this series is the character development. In the first book, we're met with a Kyana who is essentially a lonely, angry warrior bitch with but a few friends to whom she is completely loyal. As the story  unfolds, however, and glimpses of Kyana's past are shown you come to gain a better understanding of Kyana. Simultaneously, as Kyana's present twists and turns in ways she never could have imagined, she comes to thaw and let more of herself be shared with those around her. In particular, the romance between her and Ryker acts as sort of a stablizing agent for the both of them. Serious and noble Ryker finds himself cutting loose, tough and prickly Kyana finds herself softening. This book had all of this development coming to full bloom and, finally, let readers see the final result.

What I didn’t like: The story happened, the bad guy was defeated, new roles were established and then...it was over. We didn't get to see Ryker and Kyana settled in their romance. We didn't get to see the reprecussions of a beloved character's death. This was supposedly the last book of the series but several loose ends were left dangling. I hope that this was intended to Kyana's story and not that of the series itself - it would be nice if there could be more books, perhaps taking on Haven as a main character, that would develop on the ending Chosen provided.

Overall: This book was not as good as its two predescessors and, in my opinion, did not live up to the tension the back cover blurb promised. That being said, that more than one character dies by book's end did come as a surprise, especially considering the identities of those characters. Overall, however, the book's redemption comes from the fruition of the character development and being able to witness just who Kyana and Ryker - among others - have grown into over the course of the three books. What is more, this book really highlighted the relationships that tie this cast of characters together and demonstrated how these relationships have served to shape and strengthen the characters.

Would I read this author again: Yes, if she (technically, they, I know) continued on with this series in some fashion - I did mention wanting the ending developed and fleshed out, didn't I?

To purchase the book for yourself, you can find it at Chapters.Indigo.ca, Amazon.ca, Amazon.com, or The Book Depository. Enjoy!
Posted by Calliope at 7:56 AM