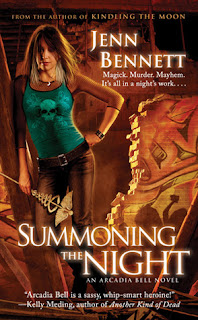 MAGICAL TRICKS. DEMONIC TREATS.
After narrowly escaping her fate as a sacrificial scapegoat, Arcadia Bell is back to normal. Or at least as ordinary as life can be for a renegade magician and owner of a tiki bar that caters to Earthbound demons. She’s gearing up for the busiest day of the year—Halloween—when a vengeful kidnapper paralyzes the community.

The influential head of the local Hellfire Club taps Cady to track down the fiendish bogeyman, and now that she’s dating red-hot Lon Butler, the Club’s wayward son, she can hardly say no. Cady and Lon untangle a gruesome thirty-year trail of clues that points to danger for the club members’ children. But locating the person behind the terror will require some metaphysical help from Cady’s loyal bar patrons as well as her potent new Moonchild powers—and she’d better figure it out before the final victim disappears and her own darkest secret becomes her biggest enemy.


---------------------------------------------------
Now, I positively, absolutely ADORED the first book in this series- it was the bee's knees, no question. I felt that in a lot of ways it went where a lot of romances fear to tread - after all, it matched a 25 year old Tiki bar owner, magician and fugitive with a 42 year old demon with a teenage son. Okay, okay, I know other books have hefty age gaps - some of them with a difference of centuries - and other heroes and heroines have had kids - Kelly Gay's Charlie Madigan, Patricia Briggs' Adam Hauptman and Eileen Wilks' Rule Turner, to name but a few. Jupe Butler, however, is not your average UF kid and tends to be a lot more involved that you'd expect (and on random side note: that kid so needs his very own YA series one day).  What's more, the treatment of the aforementioned age gap gets a lot more coverage than in cases where we're talking about something like seventy year old Emma and twelve hundred year old Lachlain. Toss in some demons, some fairly whacked out parents, demonic halos and a psycho named Riley and KABAM! You've got yourself one hell of a book.

And then along came book two...

And blew book one away.

Now, don't get me wrong - it wasn't a perfect book. While the first managed to avoid anyone calling Cady a gold-digger or a mid-life crisis, book two had both. It also had a blackmail scheme that makes me cringe just thinking about it, mostly because it seems more like a bad guy reaching for straws and the good guys letting him for some bizarre reason. Weird. Actually, most of the interaction Cady had with that particular bad guy when Lon was around made no sense. I mean, really? You're an Earthbound demon and you're going to try and blackmail the powerful magician that you know for a fact has some freaking scary abilities in the demon department? And you don't see how that might backfire on you? Seriously? I get that the guy is old and arrogant and rich and blah, blah, blah, but come ON! It reminds of that scene in THE DARK KNIGHT when the accountant tells Fox he's figured out Wayne is Batman and demands to be paid for his silence. "Let me get this straight," Fox tells him. "You think that your client, one of the wealthiest, most powerful men in the world, is secretly a vigilante who spends his nights beating criminals to a pulp with his bare hands; and your plan, is to blackmail this person? Good luck." *snort* Exactly.

Also, while I understood Cady's hesitation in using her Moonchild abilities, her full out refusal to have anything to do with them seems just plain stupid. You would think that it would be something she'd want to at least research and know more about. Plus, considering how danger seems to be stalking her in one form or another, you'd think it would be worth getting to know your own limitations and potential before being forced to mid-battle. When scary, millennia old demons speak to with reverence, regardless of how you acquired those powers, they're definitely something you should at least know the theoretical potential behind them. Especially if you're going to continue dealing with demons.

In spite of those little *cough* points of contention, I really enjoyed the book. In particular, I loved how the relationship between Cady and Lon progressed and deepened and how Ms. Bennett wove in how that relationship expands to develop a family unit rather than just a couple. Jupe was a delightful and refreshing character, as you'd expect once you've met him. Favourite scene, hands down, has to be when he and Cady are discussing the VERY stupid thing he's done to himself. That whole conversation, just the two of them, about who she is...gods, it made me cry!

To purchase the book for yourself, you can find it at Chapters.Indigo.ca, Amazon.ca, Amazon.com or Barnes & Noble. Enjoy!
Posted by Calliope at 11:29 PM