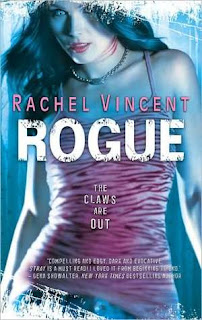 I know that better than most. Since rejoining the Pride, I've made big decisions and even bigger mistakes: the kind paid for with innocent lives. As the first and only female enforcer, I have plenty to prove to my father, the Pride, and myself. And with murdered toms turning up in our territory, I'm working harder than ever, though I always find the energy for a little after-hours recreation with Marc, my partner both on- and off-duty.

But not all of my mistakes are behind me. We're beginning to suspect that the dead are connected to a rash of missing human women and that they can all be laid at my feet--two or four, take your pick. And one horrible indiscretion may yet cost me more than I can bear...

First line: "Catch and release, my ass!" Grunting, I shoved the stray facedown over the trunk of Marc's car, snatching back my free hand just in time to avoid his teeth as they snapped together.

What I liked: I love the characters, hands down, especially Faythe's brothers. It was delightful to see the calm and collected Michael lose his cool for a change and blame Faythe for all the Pride's recent trouble. To see Ethan swoop in and comfort his little sis with brownies and scotch after everything goes to hell for her. To see Ryan...well, Ryan was an ass. But that's Ryan. Would have liked more Owen - the man has got to personally be holding up the whole bright side initiative. Best part, hands down, has to be the relationship between Faythe and her Daddy.

What I didn’t like: You know, I love Faythe. She's epic. She's awesome. She's kickass. I especially love what a strong, independent character she is and how hard she fights to be acknowledged as a person rather than just a baby factory. That being said, her relationship with Marc makes me want to scream. Werecat culture has had instilled such a strong aversion in Faythe to the typical tabby expectations that even the sight of an engagement ring has her backing away in horror and refusing to so much as carry it on her person to put her lover Marc at ease regarding his place in her life. And while I can understand how Marc would need the reassurance - he is, after all, a stray (turned rather than born) - he also probably should have paid more attention to past experience and known better. Their whole relationship SNAFU in this book pretty much had me banging my head against a wall.

Overall: I have to say, when it came to the bad guy plot, that baby had a lot more twists and turns than I could have predicted. Toss a cast of well fleshed out characters, an intriguing family dynamic into one of the most well layered and captivating worlds put to paper and even the disastrous love plot couldn't turn me away.

Would I read this author again: Are you kidding? There are four more books in this series - what do you think?

To purchase the book for yourself, you can find it at Chapters.Indigo.ca, Amazon.ca, Amazon.com or Barnes & Noble. Enjoy!
Posted by Calliope at 12:17 AM