Did I miss a week? Yes? No? I don't even know, having been the busiest of busy beavers lately. But, hey, I'm here now and, really, does anything else matter?

This week's theme is my Top 5 Favorite Female Movie Characters and, as anyone who knows me can tell you, I have a wealth of resources to draw from so, if it's all the same, I think I'll skip my usual introductory babel and get straight to the good stuff.

So, without further ado, I present my Top 5 Favorite Female Movie Characters!

#5 - Belle from Disney's Beauty and the Beast

Belle is my hero and has been since I first saw the movie when I was just three years old. She looks like me with brown hair and brown eyes. She loves to read and, what's more, she loves to talk about what she reads. She a bit of an odd duck who doesn't quite fit in among the townsfolk. And then she goes on to have an adventure in an enchanted castle with talking furniture and an amazing library and saves the Beast from a potentially eternal curse. As Lumiere says, "Don't you see? She's the one! The girl we have been waiting for! She has come to break the spell!" 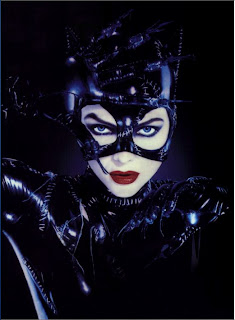 She starts off a mousey, mild mannered assistant whose boss tosses her out the window when she uncovers records of his dirty dealings. Cue a bunch of cats, some chugged milk, a little smashed neon and a reincarnated leather jacket and - presto! - Catwoman was born. She flirted with Batman, toyed with Penguin, and  messed with her aforementioned murdering boss. To quote Penguin, "You're Beauty and the Beast in one luscious Christmas gift pack" 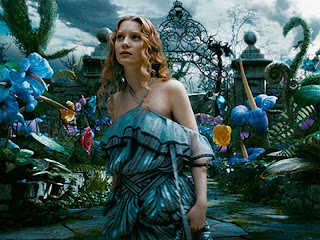 Alice tries to escape the pressures and monotony of her life by following a rabbit down its hole and into "a place like no place on Earth. A land full of wonder, mystery, and danger! Some say to survive it: You need to be as mad as a hatter." It's a place of impossible things and, in due course, Alice is shrunk, stretched, scratched and stuffed into a teapot! Fast forward, and she's told she needs to be the champion and slay the Jabberwocky. What I love most? Not once does Alice break down in tears or bemoan her fate or close her eyes and wish for home. Sure, she thinks it's all a dream at first and, okay, she balks at first but ultimately she finds her muchness and saves the day. "I try to believe in as many as six impossible things before breakfast. Count them, Alice," she says, "One, there are drinks that make you shrink. Two, there are foods that make you grow. Three, animals can talk. Four, cats can disappear. Five, there is a place called Underland. Six, I can slay the Jabberwocky."

#2 - Evelyn O'Connell from The Mummy and The Mummy Returns She starts off something of an uber-geek, showing up the Cambridge scholars who'd refused to admit a woman into their midst by deciphering the location of the lost Book of the Dead. She sets off to put together her own little expedition team to head out and retrieve it and, somewhere between there and becoming a best-selling adventure writer, she encounters mummies, curses, gods, magic and past lives and becomes quite the bad ass thank you very much. And that's in addition to being a wife, mother, and sister to some very taxing males. In her own words, "I-I may not be an explorer, or-or an adventurer, or-or a treasure seeker, or a gunfighter, Mr. O'Connell, but I am proud of what I am...I...am a librarian..."

#1 - The Wicked Witch of the West from The Wizard of Oz and Oz, the Great and Powerful 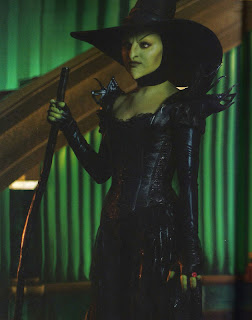 The Wicked Witch gets a raw deal. I mean, heck, in The Wizard of Oz she shows up in Munchkinland to find the Munchkins celebrating the fact a house had just fallen out of the sky and crushed her sister to death. When she then asks to have the only remaining piece of her sister - her shoes - she gets told nope, sorry, they clearly must be powerful little beauties for you to want them so badly so we'll just keep them. And if you've seen Oz, the Great and Powerful you know her lot hasn't improved much. To say nothing of Wicked. Got to love a character that so dynamic, managing to stir feelings of pity while still leaving no doubt to her evilness. And she only gets better with time!
Posted by Calliope at 8:16 PM