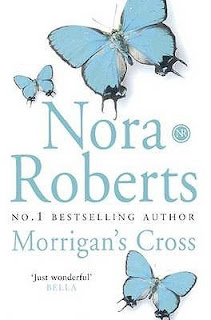 Cover Blurb: In the last days of high summer, with lightning striking blue in a black sky, the sorcerer stood on a high cliff overlooking the raging sea...

Belting out his grief into the storm, Hoyt Mac Cionaoith rails against the evil that has torn his twin brother from their family's embrace. Her name is Lilith. Existing for over a thousand years, she has lured countless men to an immortal doom with her soul-stealing kiss. But now, this woman known as vampire will stop at nothing until she rules this world—and those beyond it...

Hoyt is no match for the dark siren. But his powers come from the goddess Morrigan, and it is through her that he will get his chance at vengeance. At Morrigan's charge, he must gather five others to form a ring of power strong enough to overcome Lilith. A circle of six: himself, the witch, the warrior, the scholar, the one of many forms and the one he's lost. And it is in this circle, hundreds of years in the future, where Hoyt will learn how strong his spirit—and his heart—have become...

First line: There was a storm in him, as black and vicious as that which bullied its way across the sea.

What I liked: I love those stories where the hero or heroine is from another time or world and finds themselves displaced into ours in the present day. Seeing them try to figure out computers, cars, and television, to say nothing of fast food and soda pop, is always a real delight and I particularly love when they start making comparisons between their world/time and ours. This book has half the main cast playing the displacement game; Hoyt is hopping forward in time and Larkin and Moira are crossing over from another world. I particularly loved the interactions between Hoyt and his brother Cian, his vampiric brother Cian who not only got himself to the present day by the long route, by living through the interceding years, but had the sardonic, embittered sense of humour to make the most of his brother's ignorance.

What I didn’t like: There's nothing wrong with the noble and honourable knight; he's stood as the heroic ideal for centuries after all. Unfortunately, as with everything else, virtue can be had too much as well - almost sickeningly so. Hoyt, his love interest, Glenna, Moira and Larkin have very clear ideas of right and wrong, good and bad, and stubbornly hold to them regardless of consequences. Don't get me wrong, it's admirable to hold on to your honour and beliefs. But when multiple worlds are relying on you to live long enough to face the big bad evil witch and her bigger and badder army risking your life - especially when you know your training is lacking and your chances of success are low is pure idiocy. And to do so repeatedly is just annoying. Especially when there are other characters about pointing out how dumb they're being.

Overall: I didn't love it, but I didn't hate it. I love Cian - he was a great character that was a pretty good blend of sarcastic humour and classic vampire. Hanging around his brother and being drawn in to this battle preparation thaws him somewhat, but at book's end he's still the same dark and broody vampire he is at the start. What's more, he serves as a stand in for the reader (or at least this reader) and gives his cohorts a much needed reality check several times, though more often than not they dismiss his advice as coming from the vampire. The plot was intriguing, weaving history and religion together with magic and mayhem for a delightfully suspenseful and complex story. Unfortunately, the goody-goody quality of some of the heroes is too over the top; there's being moral and doing the right thing and then there's being stupid and risking too much. I understood where they were coming from, but it got to be tiresome more than once. What's more there are times where the story lagged, where the balance of Glenna and Hoyt's romance and their larger mission seemed off, and where the action seemed squeezed in. More than once it seemed like Lilith's appearances and mentions were more for the sake of reminding the reader she was around than for any actual development. Overall, therefore, my opinion of the book was rather lukewarm.

Would I read this author again: Yes - even if this book had been wretched, which it wasn't, Nora Roberts has written in so many other genres and styles that it would be utterly ridiculous to judge her whole volume of work based on but a single piece!

To purchase the book for yourself, you can find it at Chapters.Indigo.ca, Amazon.ca, Amazon.com, or The Book Depository. Enjoy!
Posted by Calliope at 4:28 PM