So, anyone who knows me knows I watch a lot of television. Some people play music in the background, I marathon television shows. Which gave me a lot of options to run through for this week's Top 5 post - my Favourite TV series, Part 2. I mean, it goes without saying that Supernatural is still the reigning champ - especially now that they've canned the Leviathan arc and gone back to focusing on the brothers' relationship and the monsters. But, hey, that's neither here nor there.

Since the last Top 5 post dealing with my favourite television series, the fall season has seen a slew of new releases and I've caught up on some much hyped-about series I hadn't gotten around to yet, although, I admit a preference for those 80s detective shows.

Again, I digress. The point here is that this list was interesting to put together, to say the least, and without anymore of my babbling, I present Calliope's Domain's Top 5 Sundays Fave On-Going TV Series - Part Two! 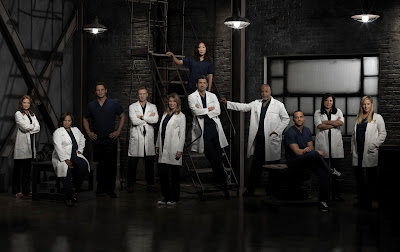 Alright, so tiny confession time; my love affair with this show waxes and wanes depending on whether or not Cristina and Owen are together. Their relationship makes the show for me, mostly because Meredith annoys me more often than not and makes me want to scream. I understand her, but understanding really doesn't help. The medical stories are fantastic, don't get me wrong, but I'm a drama vampire and Owen and Cristina bring the drama. And Callie and Arizona, of course. 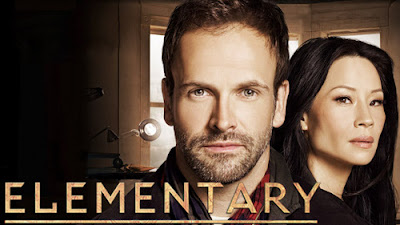 It's an American take on a modernized Sherlock. He's still British, brilliant, and brash, but now he's in New York City just out of rehab for drug abuse with Dr. Watson a former surgeon turned recovery coach who's taken him on a client. And did I mention Watson is now female and Asian? It's a great new take on an old tale. Best part of all? You get more than three episodes every eighteen months!

The sidekicks get their turn in the lime light and, unlike with Teen Titans, the mentors are still hanging about to lend a hand and provide guidance and assistance when needed. It only got better in the second season when a five year time jump meant you got Nightwing AND Robin, plus got to see the heroes you'd come to know and love in the first season all grown up. The fact that the plots have only improved since last season is but the icing on the cake. Now if only Cartoon Network would stop putting it on hiatus! 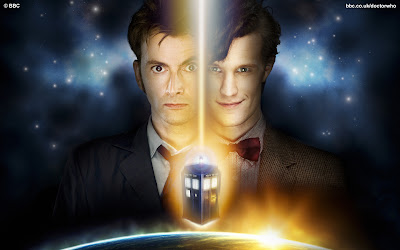 This is a show about a mad man in a box travelling through all of space and time, saving worlds and galaxies, if not the universe itself, over and over again, with a companion or two in tow to serve as his moral compass. Or, you know, in the words of The Doctor himself,


I'm the Doctor. I'm a Time Lord. I'm from the planet Gallifrey in the Constellation of Kasterborous. I'm 903 years old and I'm the man who is gonna save your lives and all 6 billion people on the planet below. 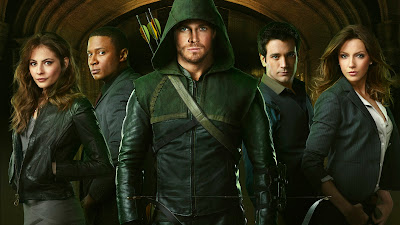 Oliver Queen has just returned to civilization after spending five years marooned on an isolated prison island (or maybe not - who can tell with this guy?). He returns home to Starling City and immediately dons a hood and picks up a bow to avenge the city against a group of the city's rich and powerful whose names appear in a list bequeathed to him by his father. That being said, I'd like you take a moment to look at Stephen Amell. Now imagine him shooting a bow. Or working out sans shirt. Or in a suit. Or...well, heck, just LOOK at him. In my defense, the show also has awesome plot and great story lines...but Stephen Amell doesn't hurt. Not one little bit.
Posted by Calliope at 6:31 PM

I have to admit- both Arrow and Elementary look awesome! I'm not a Grey's Anatomy fan though- reminds me too much of a soap opera. Dr Who and Young Justice aren't quite my speed either.