Top 5 Sundays #31 - Books/Series You Have Read More Than Once!

There are always books you go back to, books where the characters are like old friends, the world a familiar safe haven, and the events a well worn path. Books in and of themselves are escapes, but these books are more than just escapes - they're like visits to your favourite vacations spots, where every scene is a different sort of salve for whatever your mood might require.

So, without further ado, here are Calliope's Domain's Top 5 (although, believe me when I say there are more - many, many, many more!) Books/Series I Have Read More Than Once! Enjoy. 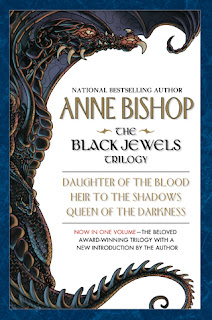 Three books that chronicle the life of a world's saviour as she grows from childhood to womanhood through the eyes of the family that loves her. It has angst, pain, tragedy, suffering, light, happiness, love, devotion - it runs the gamut back and forth over and over again yet somehow still finds it way to a happy ending. What's not to love about that? 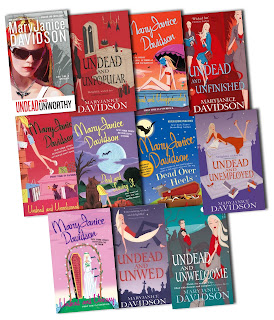 These books are hilarious. Betsy is a self-centered, shoe-obsessed, foul-mouthed, tried-and-true dumb blonde who, after an unfortunate run-in with a Aztec and a series of unfortunate events, finds herself the vampire queen of the dead. Somehow, in between all the sarcasm and comic relief, there's an actual story that unfolds that dances the line between the dramatic and the wacky.

I love Kate's journey. In the beginning, she's a tough and miserable loner. As the books progress, however, she became more open, more caring and dedicated to the people in her life; heck, she even fell in love. And each step along that path is another nugget of emotional drama as comforting and familiar as a warm blanket on a cold day.

Alright, so the first books were a little rocky but once Elena finds some closure on her past in the second book, the subsequent stories have been phenomenal. Not to mention the depth and intricacies involved in the emotional development going on in these pages. Oh, but, honestly, who am I kidding? These are books about strong, powerful men - men so powerful, so intimidating that they not only top the charts, they blow it into a whole new scale. And these books give you a front row seat as these scary-as-sin-and-twice-as-hot heroes finds themselves vulnerable to the love of the right woman. Cue the dreamy sigh here.

To quote Belle, this book has it all - far-off places, daring swordfights, magic spells, a prince (if you're flexible with the definition that is) in disguise - and enough drama to keep a drama vampire like myself sated for a decade! Mac is the perfect narrator; she starts off naive and ignorant and over the course of the subsequent books not only grows in both physical and mental strength, but knowledge too. Through Mac readers are introduced to a world that gets darker, larger and weirder with every page. And Barrons and V'lane don't hurt either!
Posted by Calliope at 2:32 PM