Hello again, ladies and gents. It seems we've found ourselves enjoying yet another weekend and, to quote cheesy weathermen everywhere, it's a scorcher. Definitely a weekend made for air conditioning and reading, especially if, like me, you don't have swimming as an alternative. This week's Top 5 is about names, specifically those of female characters. There are a ton of different reasons why your favourite character may have ended up named as they did. Mickey Mouse, for instance, had originally been "Mortimer Mouse" before Walt Disney's wife, Lillian, convinced him to change it, thank the gods. Sometimes it's the name's meaning that gets it attached to a specific character, sometimes it's just a name the author likes, or maybe the author's borrows the name from a favourite celebrity or family member. Wherever the name came from, there's no arguing that names in and of themselves, are important. They don't just identify the character, they embody the character. Names like Arwen, Dorian, Kirk and Sookie are names that are forever engrained in our culture, immortalized thanks to their stories' fame. It's a lot of pressure when you come right down to it. Remember that scene in the penultimate episode of Buffy the Vampire Slayer?


Guardian: I'm sorry, what was your name?
Buffy: Buffy.
Guardian: No, really...

#5 - LILY YU from Eileen Wilks' World of the Lupi series

Named after her grandmother, Li Lei, with a last name that more than lends itself to  puns, Lily Yu is a dedicated FBI agent and powerful touch-sensitive who's a stickler for the rules and just a tad obsessed with organization. Fortunately, she provides the perfect balance to her fiancé, werewolf alpha, Rule Turner.

Chess is a ghost banishing, haunting investigating, drug addicted Church witch. She's a mess, to put it lightly, but despite her own state of disaster she still manages to solve her cases, save the day, and go home to her hunky alpha male boyfriend, Terrible. What I like about Chess's name is the inherent dichotomy; you've have Putnam, a last name that harkens back to devout Puritan settlers (incidentally, twelve year old Ann Putnam jr. was one of the more adamant accusers during the Salem witch trials), Cesaria, which denotes a certain degree of sophistication and seems best suited to upperclasswomen, and Chess, a board game. And it all comes together in one character.

"Cicely" is a derivative of "Cecilia" - the Latinate feminine form of the Roman family name Caecilius, which was derived from Latin caecus "blind." At the start of her series, Cicely is blind to her past lives, her heritage, and her destiny. Half owl-shifting Fae, Half wind-controlling witch, Cicely is all warrior. Galenorn is prone to huge casts and has a tendency to bestow unique and distinctly different names on her characters. Cicely was no exception. 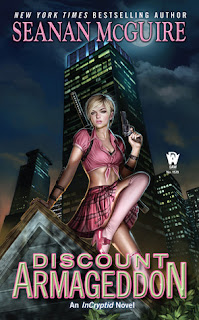 I love this name, not to mention the character. A cryptozoologist and professional ballroom dancer, Verity is of the opinion that every living creature deserves life; if they're dangerous to humanity, they should be given the chance to relocate or adapt before killing becomes an option. I love how her name means truth; she knows the truth of what's out in the world, she advocates for the truth as her family perceives it while in opposition to the truth set forth by a Covenant of monster hunters. And then there's the matter of true price, a concept derived from her full name. What is the true price one pays to hold true to family, to values, to heritage?

Talk about a mouthful. This is what happens when you've got incredibly devoted hippie parents. I think the name really says it all in this case and all you really need to know is that she goes by "Mo Wenstein" except where parents or government are involved.
Posted by Calliope at 5:29 PM

Great choices, I think they're all unique and interesting. My favorite would be Jennifer Estep's Gin Blanco, who's real name is Genevieve Snow. I think it really fits her well.

Totally agree - if this had been a Top 6 list, Gin would have definitely made the cut. What I find really great about character names is the reasoning behind them. It's like how Betsy Taylor is MaryJanice Davidson's Queen of the Vampires because it takes the name of a sophisticated Hollywood actress and draws on one of the more ridiculous nicknames for "Elizabeth" sort of like having a Queen whose also comedically shoe-obsessed and self-absorbed.

Totallynthought of Lily and Chess too! Love them! LOL on the hippie name!