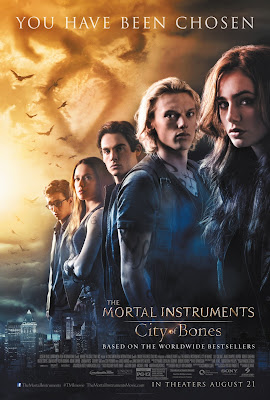 Synopsis: When her mother disappears, Clary Fray learns that she descends from a line of warriors who protect our world from demons. She joins forces with others like her and heads into a dangerous alternate New York called Downworld.

There is a world hidden within our own.

You have been chosen.

What I liked: Jamie Campbell Bower's performance as Jace was dead-on perfect. I especially loved the scene where Clary walks in on him at the piano in the library for his facial expressions alone. I also liked how they streamlined the action from the book. What do I mean by that? Well, for example, where in the book Jace and Clary keep bouncing off the Institute as they go from one errand to another, the movie not only tries to get the most of their treks out into the world, but also has Alex and Isabelle come along more often, simultaneously adding fluidity to the narrative while allowing the opportunity for all the characters to have more screen time. In other words, it takes my biggest problems with the book and fixes them. I actually prefer its narrative to that of the book, truth be told.

What I didn't like: The world of the Shadowhunters is pretty complex. There are Shadowhunters who fight demons, and there are Downworlders, commonly referred to as vampires, werewolves, mages, and fairies. There are runes that, when written on the skin of Shadowhunters, imbues them with certain abilities. There's a cup, a sword, and a mirror known as the Mortal Instruments, empowered because of their association with the angel Raziel. The angel Raziel is important because a long time ago, he came down from Heaven, bled into a cup, and offered it to humans who became the first Shadowhunters, granting them Buffy-like powers so they could better fight the demons. Throw in a bunch of personal history affecting the various adults and a villain with a dangerous mix of delusions of power and total paranoia, and its no small wonder what the pacing can come across as a bit staggered.

Overall: Hollywood's gotten crazy lately adapting young adult series for the big screen; already this past year  The Host, Beautiful Creatures, Percy Jackson and the Sea of Monsters, and Warm Bodies have graced our theatres, with The Hunger Games: Catching Fire, Vampire Academy, and Divergent all forthcoming over the next year or so and no doubt dozens more to come after that. I love book adaptations; screenwriters basically take your favourite books, pillage the best parts to bring to life, then twist and restructure making it more suitable for a big screen narrative while throwing in a dash of surprise, whether you've  read the books or not. Mortal Instruments: City of Bones lives up to this tradition and does a fairly good job of it. Yes, its bogged down by trying to explain its own mythology and history, but ultimately, the actors do a terrific job of bringing the characters to life and the action plays out well. I know that the author of the books has a horrible reputation for plagiarism and cyber-bullying, among other things. It's important to remember though that a movie is more than the book it's based on. Where a book is the brainchild of a single individual, a movie is brought to life by the actors, screenwriter, director, and countless crew members. Their work and efforts deserve to be seen and judged for their own merits, without the taint the books incur for their creator's past.

Would I watch a sequel: Yes, so they had better follow through with its (currently postponed) production!


It's currently in theatres so I would definitely recommend making the trip to view it.
Posted by Calliope at 7:02 PM


I used to be suggested this blog by means of my cousin. Im now not certain whether this publish is written by means of him as nobody else understand such special approximately my problem. Youre incredible! Thanks!