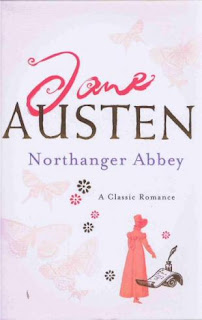 Cover Blurb: While enjoying a six weeks' stay in fashionable Bath, the young and callow Catherine Morland is introduced to the delights of high society. Thanks to a new literary diet of the sensational and the macabre, Catherine travels to Northanger Abbey fully expecting to become embroiled in a Gothic adventure of intrigue and suspense and, once there, soon begins to form the most gruesome and improbable theories about the exploits of its occupants. An early work, but published posthumously, Northanger Abbey is a satire on the Gothic mode typified by the novels of Ann Radcliffe, as well as a witty comedy of manners in the style of Jane Austen's later novels and, ultimately, an enchanting love story.

First line: No one who had ever seen Catherine Morland in her infancy would have supposed her born to be an heroine.

What I liked: If Catherine Morland was the heroine of any other type of novel, she'd be branded too stupid to live within the first ten minutes of her adventure. She always believes the best of people, thinking that any wrongs they commit were done through ignorance rather than intent, and yet at the same time she allows the Gothic novels she reads to have her suspecting a general of murdering his wife (her justification being that his daughter's comment that she hadn't been home when her mother passed away). Enter Henry Tilney whose wit, humour, and compassion  paint him as the perfect match. And that's what I loved most - the pairing of Henry and Catherine and the balancing of their personalities. It was remarkably well done in true Austen style.

What I didn’t like: Given that what I liked best was the pairing of Catherine Morland and Henry Tilney it should come as no surprise that what I liked least was that there was so little of them together! In fact, what you get of their interactions is a few snippets of conversation, more often than not with his sister in attendance. I would have loved more of these two but, alas, instead there's more interaction between Catherine and the dastardly Mr. Thorpe. A waste. Like reading lots about Elizabeth and Wickham and being skimped on the Darcy airtime.

Overall: The book gives the impression of being but a brief window into this world; it's like a brief vacation taken in Catherine Morland's life. Incidentally, it actually does span Catherine Morland's six week visit to Bath and Northanger Abbey. Its tone is written as a third-party account, the narrator occasionally lapsing into first person to offer criticism, opinions, and explanations of the events and characters as they develop. It's definitely a memorable and engaging style. It was definitely over too quickly; several points, such as Thorpe's villainy (so to speak) and Catherine's romance with Tilney, could have used more fleshing out. I realize that this book is nearing its two hundredth anniversary, but I rather wish that Austen had written a sequel of sorts or perhaps an epilogue to show just what shape their happily ever after takes. Not to mention what becomes of the Thorpes and Catherine's brother, James.

Would I read this author again: Yes - Mansfield Park is up next!

To purchase the book for yourself, you can find it at pretty much anywhere, there are tons so many different editions out there! But, in the interest of keeping true to Calliope's Domain style, here are some links anyways!  Chapters.Indigo.ca, Amazon.ca, Amazon.com, or The Book Depository. Enjoy!
Posted by Calliope at 5:16 PM